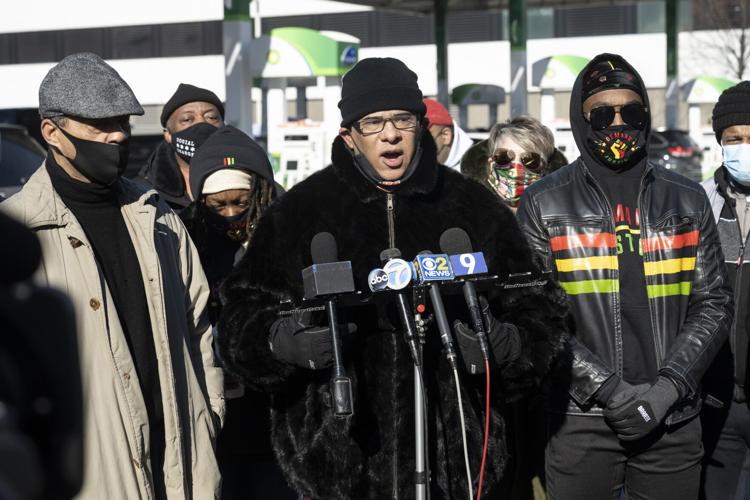 Tio Hardiman of Violence Interrupters speaks during a press conference at the BP gas station by 52nd St. and S. Lake Park Ave. on Saturday, Jan. 23.

A group of Kenwood Academy and Hyde Park Academy alumni gathered Saturday morning for a press conference at the BP gas station on Lake Park Avenue and 52nd Street, where they announced the creation and manning of “safe zones” at gas stations in Hyde Park and surrounding neighborhoods, a response to the recent surfeit of carjackings across the city.

“As we saw our friends being harmed and carjacked and scared, and indicating how scared they were, we decided to try to make an effort to try and correct the issue and provide a safe zone on Saturdays, 11 a.m. to 1 p.m., consistently,” said organizer Steven DeJoie (Kenwood ‘78) as he outlined the ad hoc group’s plan.

“Today, we are making sure that our presence is known,” added organizer Afrika Porter (Kenwood ‘91). “The brothers are out and being present and helping women as they get their gas. We already have brothers on 87th Street and Stony at the BP there. We have brothers going to 39th St. off of King Drive. So, we are all over.”

During a Facebook Live press conference on Jan. 21, Chicago Superintendent of Police David Brown stated that 144 vehicular carjackings have occurred in the city since the beginning of the year. Superintendent Brown also said that the majority of the 114 people arrested in 2021 for hijacking-related crimes were between the ages of 15 and 20. Their motives included joyriding and the facilitation of anonymity while committing other crimes.

Echoing Superintendent Brown’s comments, Tio Hardiman of Violence Interrupters said during the Saturday morning press conference, “It’s not gang bangers. A lot of this is being done because (the) excitement, (the) adrenaline rush. People are carjacking just for carjacking.”

Justin Blake, owner and operator of Black Underground Recycling and the uncle of Jacob Blake, who was shot 7 times in the back by police this past summer in Kenosha, WI, attended the Saturday press conference after returning from the inauguration in Washington D. C.

“While we are working for justice all over the nation, we definitely got to work it here at home where we were born and raised,” he said. “So, we came to lend a hand and lend a voice to support my brothers and sisters here in Chicago.”

As the Saturday press conference ended, groups of men in cars bearing the red, black and green striped Pan-African flag drove to a number of additional gas stations on the South Side, hoping that their presence would deter carjackers and provide a safe zone for the purchase of gasoline.

The organizers of the effort can be reached at CommunitySafe2021@gmail.com or 312-217-1249 for more information.