Murder Rate Rose Sharply in US in2020, Especially in Cities 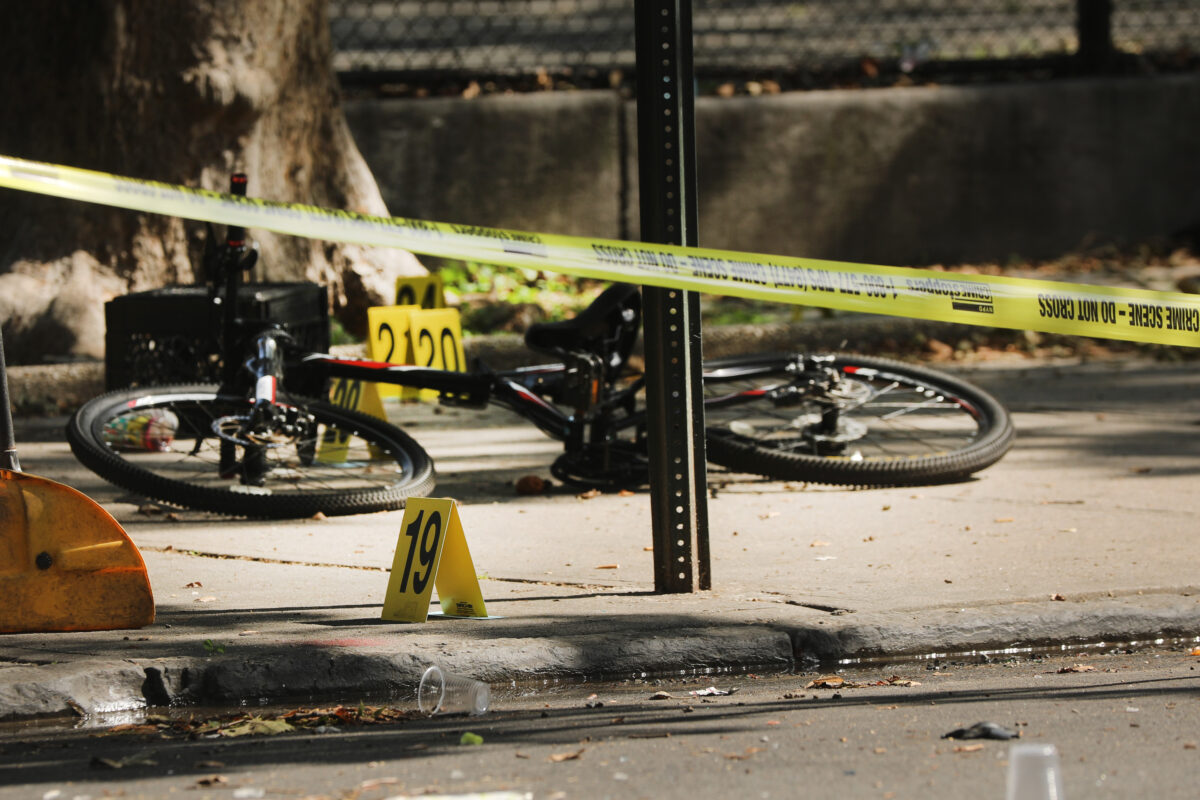 NEW YORK, NEW YORK – JULY 13: Police ballistic markers stand besides a child’s bicycle at a crime scene in Brooklyn where a one year old child was shot and killed on July 13, 2020 in New York City. The 1-year-old boy was shot near a playground during a Sunday picnic when gunfire erupted. Two other adults were wounded in the evening shooting. New York City has witnessed a surge in gun violence over the past month with 9 people killed, including children, and 41 others wounded on the Fourth of July weekend alone. The gun violence is occurring against the backdrop of a nationwide movement to consider defunding police departments. (Photo by Spencer Platt/Getty Images)

The murder rate significantly increased in the United States in 2020, particularly in major metropolitan areas, according to newly released crime data.

Cities with a population of 1 million or more saw a 32.2 percent increase in homicides, according to figures released by the FBI that are drawn from local sources. Every area, including rural counties, saw jumps in homicides, but the biggest increases were in cities, especially in cities with 100,000 residents or more.

The data confirms a report released last month showing homicide rates in a sample of 34 cities were 30 percent higher in 2020 than in 2019.

Researchers said that sample suggested the national murder rate increase was likely to exceed the previous largest single-year increase of 13 percent in 1968.

Experts believe the rise in killings can be linked to stressors introduced or exacerbated by situations stemming from the COVID-19 pandemic.

“Homicides are linked to all the pandemic conditions: the higher unemployment, mental, emotional, physical, financial stress, and then that’s concentrated in areas that typically contain higher amounts of poverty,” Christopher Herrmann, assistant professor at the City University of New York’s John Jay College of Criminal Justice, told The Epoch Times.

“Schools are closed, people are out of work, law enforcement, due to either illness within the rank and file of agencies, the weakened staffing, to officers no longer engaging proactively in community policing, no after school programs, no sports—I think the combination of all of that just caused an incredible spike of gun violence,” added Lisa Dadio, director of The Center for Advanced Policing at the University of New Haven.

The murder rate got higher as the year went on, according to the newly released statistics, supporting the theorized link to the pandemic and related restrictions. 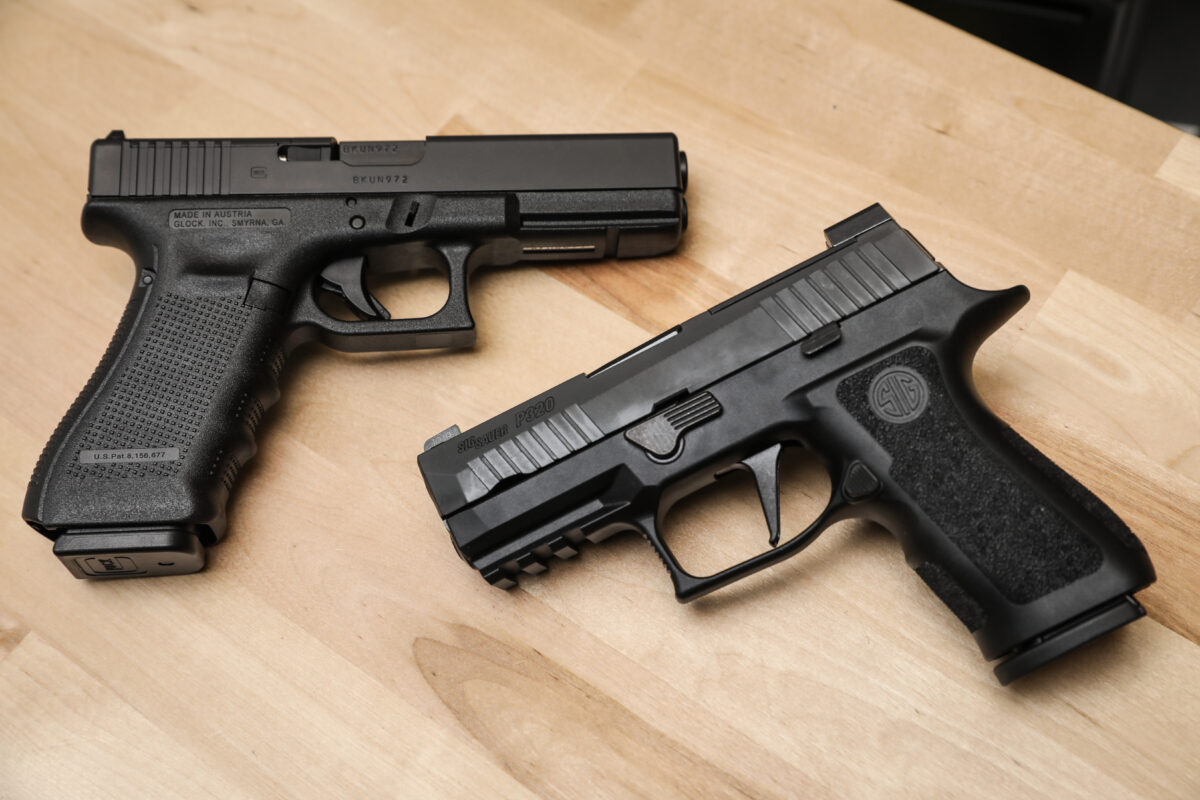 Many Americans last year suffered through harsh restrictions imposed to try to curb the spread of the CCP (Chinese Communist Party) virus, which causes COVID-19. Those restrictions did not lead to lower death tolls, but they did empty out normally bustling areas.

Kenneth Gray, senior lecturer at the University of New Haven’s Criminal Justice Department, said the reasons behind the increase in murders aren’t clear, but there are some guesses.

In addition to more people being unemployed, “you have lockdowns, so there’s less people out on the street to act as guardians to stop actions from happening,” he told The Epoch Times.

Police forces being defunded, threatened with funding cuts, or with having their ability to carry out their duties cut back or erased, also likely played a factor, according to Gray. 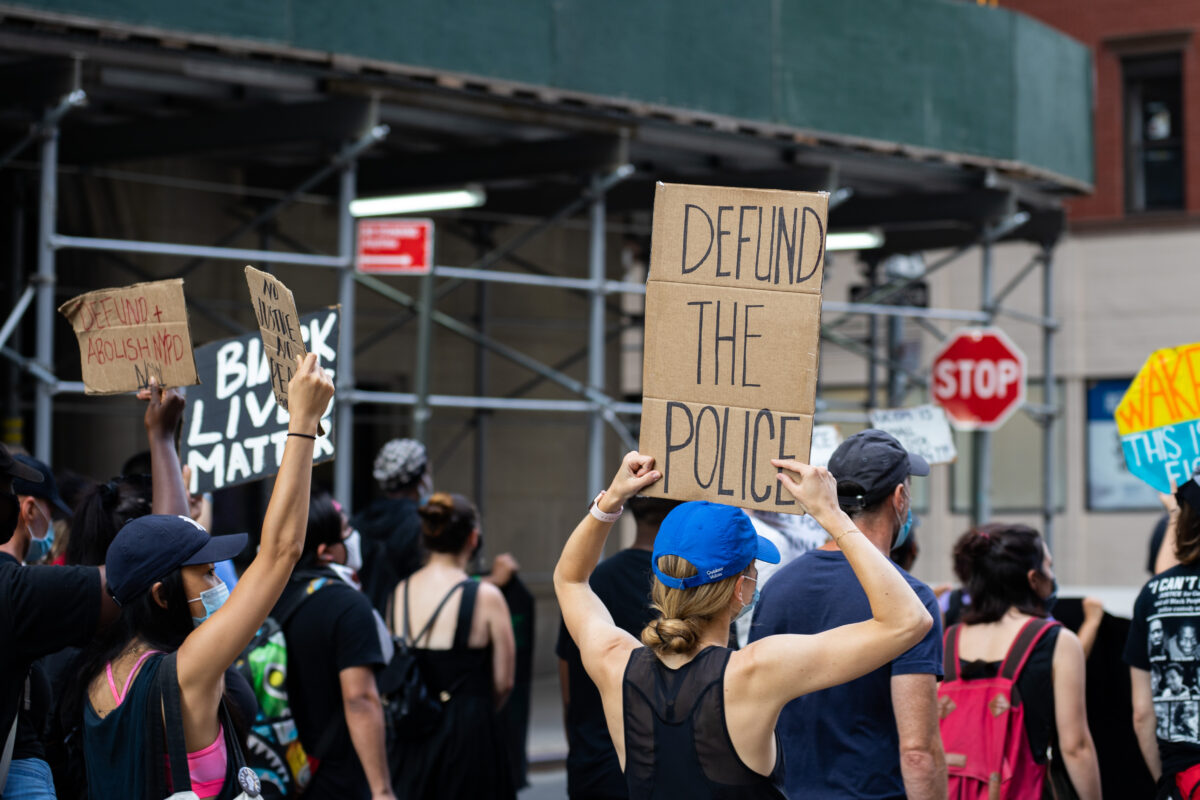 A protester is holding a “defund the police” sign at a Black Lives Matter protest in Manhattan on July 13, 2020. (Chung I Ho/The Epoch Times)

Cities across the United States slashed police funding either immediately or in upcoming budgets. New York City, for example, cut $1 billion from the NYPD’s budget. Officials in Portland, which saw murders skyrocket in 2020, cut $15million from police funding. Mayor Ted Wheeler recently asked the City Council to approve $2 million to invest in police amid the murder wave.

But police officers are usually aiming to solve murders, not stop them, Tio Hardiman, CEO of Violence Interrupters, told The Epoch Times.

In one recent case in Chicago, a man on parole who was allegedly peeping on his neighbor’s wife was confronted by the neighbor. The man brandished a fire arm and threatened to kill him.

Hardiman was called and was able to use the man’s grandmother and contacts to convince him to stand down.

“We need specially, highly trained individuals that know how to intercept whispers on the street level in order to stop the killing on the front end,” Hardiman said. “Because everybody’s in response mode.”

Hardiman, who is also an adjunct professor of criminal and restorative justice at North Park University, called for approaching gun violence as a public health epidemic, with a major focus on convincing young people to push for peace among their peers. 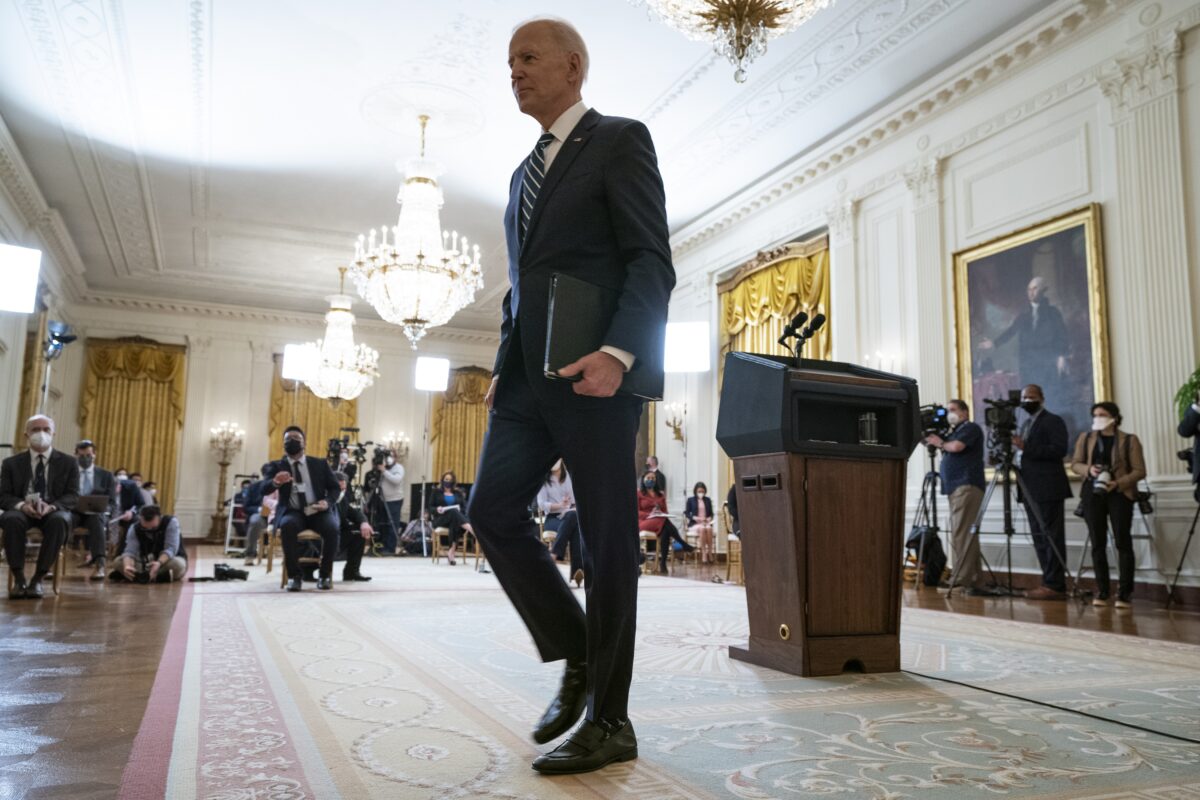 President Joe Biden walks off after a news conference in the East Room of the White House, Thursday, March 25, 2021, in Washington. (AP Photo/Evan Vucci)

Experts were divided on whether new restrictions would have much of an impact.

Herrmann, of John Jay, said that there’s solid research showing states that have harsher gun control laws have lower rates of homicide. Examples of laws that work, he asserted, are a mandated waiting period for seven or 14 days and so-called red flag bills, which allow a neighbor or relative to alert authorities to potential wrongdoers, which can lead to guns being seized.

Dadio of the University of New Haven disagreed.

“The majority of people that are committing these types of crimes that we’re seeing, gun homicides, they’re not getting the gun legally anyway,” she said, noting that many shooters are criminals who are already barred from purchasing or possessing firearms.

“Chicago is probably a classic example of that. They have some of the strictest gun control laws in the country and have forever, and yet they continue to be plagued by horrific gun violence,” she added. Follow Zachary on Twitter: @zackstieber