By Anisah Muhammad and LaRisa Lynch 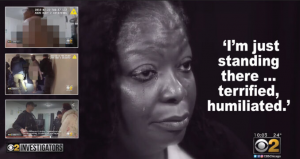 CHICAGO—“She could have easily been the next Breonna Taylor,” said Elizabeth Jordan, a staff attorney with the American Civil Liberties Union (ACLU) of Illinois.

Ms. Jordan was referring to Anjanette Young, an innocent Black woman who was handcuffed by Chicago police in her home nearly two years ago. Video was recently released of the terrifying encounter.

Ms. Young, the victim, filed a Freedom of Information Act request for the footage. A local CBS Chicago station also filed a request. Both requests were denied.

According to the news station, Ms. Young obtained the footage after a court forced the Chicago Police Department to turn it over as part of her lawsuit against police.